admin
Orange Line is an automated rapid transit system in Lahore, Pakistan. The line is Pakistan's first metro train since the Karachi Circular Railway which had closed its operations during 1999. The Orange line is the first of the three proposed rail lines proposed for the Lahore Metro. The line spans 27.1 km (16.8 mi) with 25.4 km (15.8 mi) elevated and 1.72 km (1.1 mi) underground. The line is served by 26 stations and is expected to handle 250,000 passenger daily. It is a part of the wider CPEC China Pakistan Economic Corridor, the Orange line is being financed by both the Government of Pakistan, and Government of China.
From Orange Line's northeastern terminus at Dera Gujjran, the track is elevated and runs in the median of the GT Road until Shalimar Station. From Dera Gujjran Station in northeast Lahore, the route travels 5.5 kilometres westward with stations at Islam Park, Salamatpura, Mahmood Booti, Pakistan Mint, and Shalimar Gardens. The track does not run in the GT Road's median near Shalimar Station - it instead turns and travels along the southern edge of the GT Road in order to bypass the garden in order to prevent damage to mature trees there.[47] Traveling west from Shalimar Station, the track returns to the median of GT Road, with stops at Baghbanpura, University of Engineering and Technology, and Sultanpura. From Sultanpura, the line then travel towards Lahore's central Junction Railway Station. From there, it travels southwest along McLeod road towards Lakshmi Chowk Station. The total distance from Sultanpura to Lakshmi Chowk is 2.5 km.[48]


Passengers from the Orange Line will be able to use Anarkali Station to transfer to the Lahore Metrobus stop at MAO College.
Leaving Lakshmi Chowk, the line travels southwest along McLeod Road, and descends into the 1.15 km underground portion that leads to the first underground station in the system, the Central Station. Central Station is located at the intersection of The Mall and McLeod Road, in front of Lahore's General Post Office (GPO) and the Lahore High Court. From Central Station, the line continues from McLeod Road and travels under Allah Baksh Road before turning south where the second underground station, Anarkali, is located. Connections from the Orange Line to the Lahore Metrobus will be available via an underground walkway. From Anarkali Station, the route continues under Jain Mandir and Lytton Road.


The Orange Line will include connections to the historic Lahore Railway Station.
From Chauburji the line continues 4.5 km towards the southwest, along the median of Multan Road. Elevated stations are located at Gulshan-e-Ravi, Samanabad, Bund Road, Salahuddin Road, and Shahnoor. From Shahnoor, the line shifts from Multan Road's median and travels along the road's southern/eastern side with a stop at Sabzazar Station. The line continues along Multan Road's edge until Awan Road Station, after which it reverts to Multan Road's median. Leaving Awan Road Station, the line continues to travel southwest along Multan Road until it reaches Wahdat Station, which lies 2.85 km to the southwest of Sabzazar Station. The line 5.2 kilometres along Multan and Raiwind Roads, with stops at Hanjarwal Station, Canal View, Thokar Niaz Baig, before terminating at Ali Town

Grip on Trip is all about revealing the real picture of Pakistani terrain from the depths of Arabian Sea to its highest vintage points like Karakoram Mountain Range, from lush green valleys of Kashmir to the vast wilderness of Thar, from Golden Sand Beaches of Gawadar to Hooper glacier of Hunza, from Mud Volcanoes of Lasbela to Suspension Bridges of Northern areas, from the most challenging Fairy Meadows Track to world's second highest plateau Deosai, from the relics of Indus Civilization to the mega metropolitan cities. 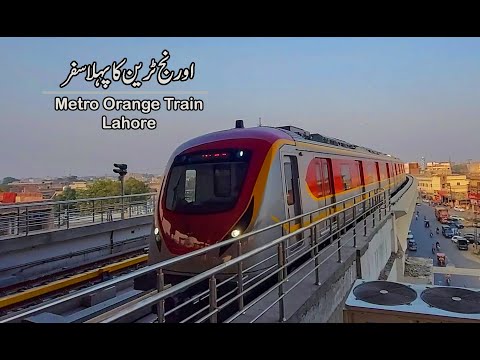